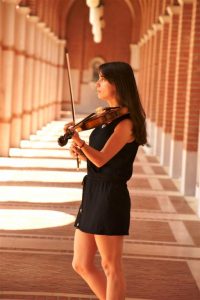 As a modern violinist, Nadia’s credits include the Houston Grand Opera, Houston Ballet, Los Angeles Pops Orchestra, and San Juan Capistrano Symphony. An active recitalist and chamber musician, Nadia can be heard throughout the year in her own concert series and as a collaborator with many of Houston’s top musicians. In addition to classical music, Nadia is also a frequent jazz violinist and fiddler. A graduate of Chapman University, Nadia’s teachers included Paul Manaster and Todor Pelev.