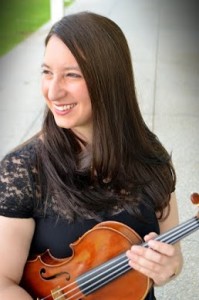 Laura Cividino, born in 1983, received her violin diploma in 2004 with prof. Diego Masutti and piano diploma in 2005 with prof. Ugo Cividino, both at the J. Tomadini Conservatory of Music in Udine, Italy. She continued her studies in Klagenfurt, Austria, with Professor Helfried Fister and in March 2008 received a violin diploma from that school. She graduated with a Master in Violin Performance with Professor Andrzey Grabiec at the University of Houston, Moores School of Music in May 2012. In February 2014 she received her viola diploma with Luca Morassutti at the G. Tartini Conservatory of Music in Trieste, Italy.

She is currently teaching and freelancing in Houston as a violinist and a violist. She is also a founding member of the Houston-based Carya String Quartet, a group dedicated to creating community through chamber music concerts and educational programs, which is in its fourth season of activity.