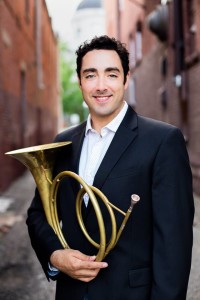 Kevin Miescke is currently working on a Doctor of Music degree at Indiana University, where a large part of his studies involve historical performance on baroque and classical horns. With the help of Professor Richard Seraphinoff, Kevin is developing a very active performing career in early music. In addition to being a founding member of the Austin Baroque Orchestra, Kevin maintains a busy travel schedule performing baroque and classical concerts all around the U.S. In 2013, Kevin joined an ensemble of early music performers from the Jacobs School of Music for a tour to Charleston, South Carolina to perform as the featured artists for a national vocal conference.

Beyond the early music world, Kevin has held a position with the Round Rock Symphony Orchestra (2011-2012) and has performed with the San Antonio Symphony, Brazos Valley Symphony, Columbus Symphony Orchestra, and the Reno Philharmonic. In 2013, Kevin won first place at the international horn quartet competition in Memphis, TN along with the other members of Cor 4, a horn quartet based in Bloomington, IN. When he is not playing the horn, Kevin gets back to his mountain town roots by mountain biking, hiking, camping, running, and skiing.