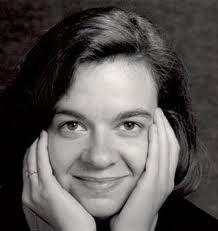 Joan Ely Carlson is a tenured violinist in the Austin Symphony Orchestra and also a member of the Victoria Bach Festival Orchestra. In addition to her appearances with the Austin Baroque Orchestra, she performs on baroque violin regularly with La Follia Austin Baroque and has performed with the Texas Early Music Project and as part of the St. Cecilia Series’ Baroque Festival at First Presbyterian Church in Austin. Also a singer, she has been a member of Conspirare since 1998, sings in the Compline Choir of St. David’s Episcopal Church in Austin, and recently joined the ranks of the San Antonio Chamber Choir for a CD recording project of the choral music of Andrew Rindfleisch for release later this year.

In the civilian world, Joan is married to David and is a recovering lawyer and a Crossfitter who can deadlift her body weight and then some. This keeps her in shape for doing her main thing: joyfully doing the bidding of her two daughters, Emma and Clara.