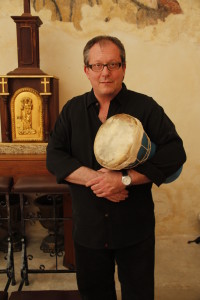 Howard Burkett, tenor, is a freelance tenor, arranger, composer and independent scholar with a particular interest in vocal music of the 16th and early 17th centuries and a sideline in Middle Eastern hand percussion. Most recently, he was Music Director for theatrical troupe The Baron’s Men’s production of The Merchant of Venice, which featured consort music of Salomone Rossi. He has made his living for the past 25 years in the retail fine wine and spirits industry. He is, thus, among other things, a third-string tenor for Conspirare, an assistant director and music editor for the Compline Choir at St David’s Episcopal Church, a drummer for “Joined At the Hip,” an American Tribal Style Belly Dance troupe, and a store manager for Twin Liquors.