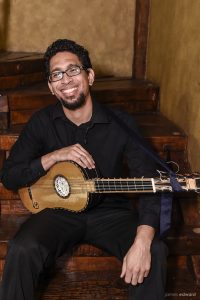 Héctor Alfonso Torres González was born in Puerto Rico where he started his guitar studies at the Preparatory School of the Puerto Rico Music Conservatory. He completed his Bachelor studies at the University of Puerto Rico, Río Piedras Campus with the distinguished Puerto Rican guitarist Juan Sorroche, and his master’s degree at the University of Wisconsin-Milwaukee studying under world renowned guitarist René Izquierdo. Recently, he finished his Doctorate in Musical Arts in classical guitar performance with a related field in Early Music at the University of North Texas while working with guitarist Tom Johnson. While at UNT, he served as Teaching Fellow of classical guitar and Teaching Assistant for the UNT Baroque Orchestra. He has concertized around Puerto Rico, China, Spain and the U.S., and has been invited to perform and judge in international guitar festivals, including the G.H.M. International Guitar Art Festival in Shenzhen, China, the 12th Annual Festival of Contemporary Music in San Francisco, the Latino Arts Annual Guitar Festival and Youth Competition in Milwaukee, among others. Apart from being an active performer, he has also received top prizes at many international guitar competitions, including the 24th Annual Appalachian Guitar Fest and Solo Guitar Competition, the 16th Annual International Tennessee Guitar Festival, 4th Annual Baldwin Wallace International Guitar Festival and Competition, and others.

As an active early music performer, he regularly plays baroque guitar, theorbo, lute, and other period plucked instruments with different chamber groups across the U.S, including the Texas Early Music Project, Austin Baroque Orchestra, Orchestra of New Spain, La Follia Austin Baroque, Ensemble Fantasmi, and others. He has studied basso continuo with harpsichordist Dr. Brad Bennight, and plucked instruments with Arash Noori and Daniel Swenberg from the Juilliard School. From 2016 to 2021, he worked and studied with the director and early music specialist Paul Leenhouts as a member of the University of North Texas’ Baroque Orchestra, where he was a frequent soloist playing works like Antonio Vivaldi’s Lute Concerto in D major RV 93. Recently, alongside baroque harpist Monika Ruusmaa, he was selected as one of Early Music America’s 2021 Emerging Artists.