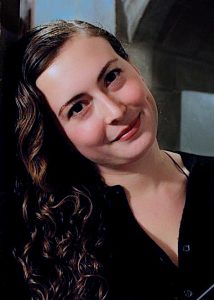 Experienced as both a soprano soloist and chorister, Hannah McGinty has focused her career primarily on historical performance and early music. A recent Austin transplant, Hannah has already found her way into numerous groups in the area, singing with the Austin Baroque Orchestra, Texas Early Music Project, Austin Cantorum, and Ars Longa Ensemble, as well as acting as Soprano I Choral Scholar at the Episcopal Church of the Good Shepherd. While in Bloomington, she founded, directed, and sang with the Burgundian Consort, an a cappella choir dedicated to well-researched performances of Renaissance choral music.

She has been featured as a soloist under the batons of Sigiswald Kuijken, as Costanza in Haydn’s L’isola disabitata and Susanna in Le nozze di Figaro at La Petite Bande’s summer academies; in a semi-staged production of the 1589 Florentine Intermedi directed by Deborah Roberts in Triora, Italy; as Calisto in scenes from Cavalli’s La Calisto as part of the Baroque Academy Soloist Program of the Amherst Early Music Festival; under Dr. Dana Marsh for a Harmonia Early Music recording of Michael Praetorius, and at the Sienagosto Academy under Michael Chance.

Trained as both a performer and scholar, Hannah is a graduate of the prestigious Historical Performance Institute of the Jacobs School of Music (Indiana University), where she received an MM in Historical Performance, studying voice under Dr. Steven Rickards, and and MA in Musicology. Previously, she received her BA in Music with Honors at the University of Chicago, where she also served as the Carol Jean Brown Choral Scholar in the Rockefeller Memorial Chapel Choir, and received the Choral Award for Musical Achievement.

In addition to her musical career, Hannah is also a yoga teacher. She substitutes at BFree Yoga Austin and teaches privately in the metro area. She currently lives with her boyfriend and a vast quantity of plants and books.