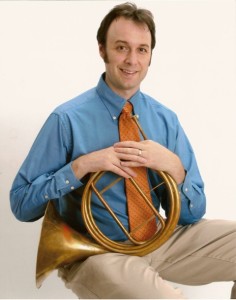 Drew Stephen is a professor of musicology at the University of Texas at San Antonio, a position he has held since 2004.  He has published and presented papers on the role of the hunt in nineteenth-century music, the historical development of the horn, Baroque and Classical performance practices, and Canadian music.  In addition to his academic interests and pursuits, Dr. Stephen is an active and accomplished performer on both modern and natural horns.

He studied horn at the University of Western Ontario, the Staatliche Hochshule für Musik in Freiburg, Germany, and the University of Toronto, where his principal horn teachers included Robert Creech, Ifor James, Fergus McWilliam, Peter Damm, and Eugene Rittich.  Dr. Stephen held the position of Alternate Solo Horn with the Orchestra of the Landesbühnen Sachsen in Dresden, Germany from 1991 to 1995.  From 1995 to 2004 he performed regularly with theatres, orchestras, and chamber music ensembles in the Toronto area.  Performances on the natural horn include concerts with the Tafelmusik Baroque Orchestra, the Aradia Ensemble, and I Furiosi.