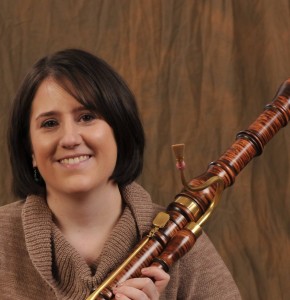 California native Patty Fagan-Miller is an active freelance bassoonist and woodwind coach in South Texas and teaches bassoon and woodwind methods at the University of Texas at San Antonio. She performs on modern and baroque bassoon in orchestral and chamber music groups in Houston and San Antonio, and is the baroque bassoonist for the Baroque Chamber Orchestra of Colorado in Denver.

Dr. Fagan-Miller moved to Texas in 2013 from Colorado, where she received a DMA in bassoon from CU-Boulder with Dr. Yoshiyuki Ishikawa. She holds an MM from the Peabody Conservatory and a BM from the University of the Pacific, where she studied with Phil Kolker and Dr. Don DaGrade.

As an orchestral musician, Dr. Fagan-Miller has performed with the Lake Charles, Stockton, and Baltimore Symphonies, and can be heard on the Baltimore Symphony’s recording of the Rite of Spring under Marin Alsop, currently available on iTunes.

Dr. Fagan-Miller is passionate about early music performance. She studied baroque bassoon at the Tafelmusik Summer Baroque Institute in Toronto for several summers and has performed with the Baltimore Baroque Band and the CU Early Music Ensemble. Her principal instructors in early music include Michael McCraw, Keith Collins, Dominic Teresi, Elizabeth Farr and Ann Marie Morgan.

When she is not performing or making reeds, Patty enjoys traditional Irish music, traveling, and spending time with her trumpet-playing husband, Daniel, and her cat, Skippy.