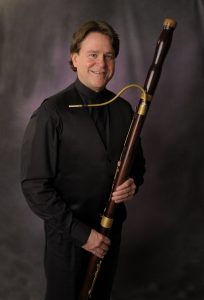 Dr. Douglas Bakenhus is the music director and conductor of the Natchitoches-Northwestern Symphony at Northwestern State University of Louisiana, where he also teaches bassoon, aural skills, string methods, and conducting. His music degrees are from the University of Texas at Austin and Texas A&M University-Commerce, and he has completed additional graduate courses in conducting and bassoon performance at the University of Michigan. In addition, Dr. Bakenhus has been the music director of the Northeast Texas Symphony since 2002, and he has held teachings positions at Texas Lutheran University and the University of Mississippi. He has taught public school orchestras in Austin ISD and Cy-Fair ISD and has made several recent guest conducting appearances throughout the region and abroad, including the Sinfonietta Bratislava in Slovakia, and the San Pedro Sula City Chamber Orchestra in Honduras.

He has also performed abroad with the NSU Faculty Woodwind Trio in Canada, Slovakia, England, and the Czech Republic. He regularly performs in orchestras throughout the Ark-La-Tex region, including the Shreveport, Longview, South Arkansas, and Texarkana Symphony Orchestras. In addition, he has participated in the Tafelmusik Baroque Summer Institute on baroque bassoon, and has made recent appearances with the Baroque Artists of Shreveport, the Austin Baroque Orchestra, Ars Lyrica of Houston, the Houston Bach Society, and the Mercury: The Orchestra Redefined (Houston).