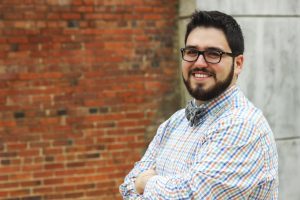 Conductor and tenor Cristian Cantu began his professional music studies at the Baltimore School for the Arts prior to earning his Bachelor of Arts degree from Columbus State University in Columbus, GA, graduating cum laude, where he studied conducting with Constantina Tsolainou, Paul Hostetter, and Dr. Jamie L. Nix. While at CSU, Cristian performed in the university’s top large and chamber ensembles as a horn player and tenor. He is currently earning his Master of Music degree in Choral Conducting at The University of Texas at Austin under the instruction of Dr. James Morrow where he performs with the UT Chamber Singers and The UT Bach Cantata Project.

A passionate church musician, Cristian has held assistant choirmaster and organ scholarships at St. Thomas Episcopal Church, Columbus, GA, with mentorship by choirmaster-organist, Rick McKnight. In Austin, Cristian has continued working as a tenor scholar at St. David’s Episcopal Church, St. Louis King of France Catholic Church, St. Mary’s Catholic Cathedral, and Good Shepherd Episcopal Church. In December 2016, Cristian co-founded and became the artistic director of a new Austin chamber choir, Austin Cantorum, an ensemble committed to the Anglican choral tradition, and to kindling a powerful connection among friends, musicians, and the Austin community at large. He considers himself incredibly fortunate to be the artistic director of such a powerful community of friends. In 2018, Cristian and Austin Cantorum are excited to premier a newly commissioned work by Philadelphia composer, Thomas LaVoy.

Beyond his work with Austin Cantorum, Cristian regularly sings with the Austin Baroque Orchestra, Ars Longa Ensemble, Texas Bach Festival, and Inversion Ensemble; has recently joined the San Antonio Chamber Choir and the Texas Early Music Project; and has recently performed with prismatx ensemble, a new music instrumental ensemble based in Austin, as a resident conductor. Following graduation from UT, Cristian is excited to continue living in Austin where he will continue developing Austin Cantorum and performing with Austin’s various other choral ensembles.