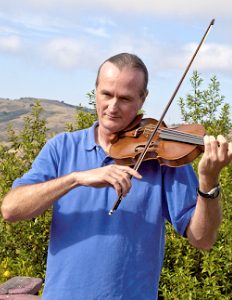 With a strictly classical upbringing, Bruce Colson started playing violin at age 7, was performing professionally by 16, and by college he was a member of the Austin Symphony Orchestra, where he currently has a tenured position in the Violin I section. Bruce holds a degree in music from the University of Texas at Austin. He is interested in all styles of music and performing possibilities on the violin, including early music on Baroque violin, symphonic and choral music, musical theater, opera, avant garde compositions from contemporary composers and even fiddling, with a special affinity for Irish music. Performances have taken him to Europe, Asia, South America and around the U.S. Other credits include film and recording work for both local and Hollywood productions. In addition to the Austin Symphony, Bruce is a member of the Austin Lyric Opera, Victoria Symphony, Britt Festival Orchestra and performs regularly with the Texas Early Music Project, La Follia Austin Baroque, Austin Baroque Orchestra, and various other instrumental ensembles. He is also the violinist in the international world music group, Mundi.