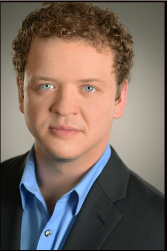 American baritone Austin Bradley enjoys a rising career on the opera and concert stage. Austin’s recent stage credits include Dancaïro (Carmen), Schaunard (La Bohème), Jules (Bolcom’s A Wedding), and Teddy in the world premiere of Hagen’s A Woman in Morocco. In 2014, Austin made his professional debut in Tosca as Sciarrone with Austin Opera.