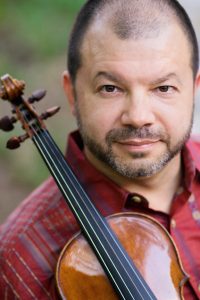 He has been a featured guest performer at Early Music Weekend at Round Top and the Amherst Early Music Festival, as well as on many recital series throughout the Southwest. He performs regularly on Austin’s St. Cecilia Music Series, including the annual Baroque Festival, held each November.

A founding member of Ars Lyrica Houston, he has performed with the group and artistic director Matthew Dirst in concerts ranging from solo recitals to fully staged Baroque opera productions. In 2011, the group was a Grammy Award finalist for its recording of Johann Adolf Hasse’s Marc’Antonio e Cleopatra.

He has recorded for the Dorian, Zephyr, Gothic, Sono Luminos, and MSR Classics labels, and plays on a Bernardo Calcanius violin made in Genoa, c. 1740.

In addition to performing, Alan Austin is the General and Artistic Director of the Immanuel and Helen Olshan Texas Music Festival, a series of summer training programs centered around one of the premier Orchestral Institutes in the US.