In the midst of its tenth full concert season, the Austin Baroque Orchestra & Chorus seeks to immerse its audiences in the sound world of the past by performing high-quality music from the sixteenth, seventeenth, eighteenth, and early nineteenth centuries using replicas of period instruments and historically-informed performance techniques. We aim to do so in a way that breaks down longstanding barriers to enjoyment of and access to the fine arts. Musically, this includes thinking outside of the box in terms of repertoire selection, going beyond Bach, Handel, Vivaldi, and Mozart; toward that end, at least one concert each year is devoted to music by composers from Latin America, music we also regularly present at national and international academic conferences. Organizationally, this is primarily through offering “pay-as-you-are-able” ticketing. We know that all too often financial considerations can serve as a primary barrier preventing access to the arts. Beyond this, these financial barriers too frequently affect communities of color and indigenous communities, so our offering of name-your-price admission can serve a dual purpose, increasing access to our performances generally as well as building diversity among our audience and donor base. Through all of our efforts, it is our goal to entertain our Central and South Texas audiences while simultaneously educating them about the various ways in which listeners in the past experienced and understood the music we perform some three or four centuries later.

Through innovative and carefully curated programming and thoughtful, approachable program notes, ABO hopes to educate those in Central and South Texas about the music of the Renaissance and the Baroque and Classic eras through an annual season of diverse presentations of orchestral, choral-orchestral, and chamber works. These programs consist of repertoire from Renaissance motets to large-scale Baroque cantatas, and from Classic-era chamber music to larger orchestral works such as symphonies and concerti. A particular specialization for the ensemble is the music of colonial Latin America, repertoire that is performed annually and typically consists of one or more Texas, US, and/or modern world premieres. Preceding each concert is an informal and informative talk about the music led by founder and artistic director, Billy Traylor.

Some of the ensemble’s more successful programs have included “Hecho en México,” a program made up of music from 18th-century Mexico, and including several pieces that had not been performed since the time of their composition. 2018’s “España Antigua, Nueva España” celebrated the 300th anniversary of the founding of San Antonio with a program of sacred and secular music from 16th- and 17th-century Spain and Mexico, and 2016’s “Native Tongues” was a concert of sacred music from Mexico, Peru, Bolivia, and Spain with texts mostly in indigenous or Creole languages. Many of these performances have taken place at San Antonio’s historic Mission Concepción, a UNESCO World Heritage Site. In 2018, “Louis, Louis,” our highest-attended program ever, explored repertoire from the courts of Louis XIV, XV, and XVI in celebration of the 300th  anniversary of the founding of New Orleans. March 2017 included the ensemble’s first production of Bach’s monumental St. John Passion, and in 2015 they performed the first known Texas performance of the larger, 1732 version of Handel’s first oratorio, Esther.

ABO has been invited to perform at a number of conferences and meetings, most notably a 2012 performance in Mexico at the Cathedral-Basilica of Durango as part of the third annual Festival of Viceregal Music; that concert consisted of works composed for the cathedral in the eighteenth century and currently preserved in its archives. Other similar performances include the American Musicological Society (San Antonio, 2018), the Lozano Long Conference for Latin American Studies (University of Texas at Austin, 2018) and the International Conference on Historical Linguistics (University of Texas at San Antonio, 2017), as well as the American Choral Directors’ Association Second Symposium on Latin American Music (Austin, 2015), and the American Guild of Organists Regional Conference (Austin, 2013). 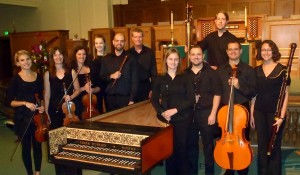 ABO began in May, 2011, as a chamber ensemble called Ensemble Settecento. Today, the combined orchestra and choir is made up of over thirty musicians with advanced training in historically informed performance who perform using period instruments and historic diction.