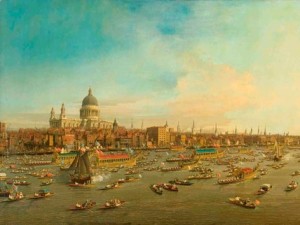 Join us as we open our fourth season with a selection of works celebrating the most mysterious of the Ancient Greek elements – water. This infinitely precious liquid has sustained, stymied, and captivated the imagination of mankind since prehistoric times, and Baroque composers were just as inspired as the ancients by its power and mystery. Important both due to its necessity for life as well as the role it played in transportation and commerce, it’s not surprising that it would inspire musical works. Including depictions of sea gods and water nymphs, and ebbing tides and raging tempests, this performance will feature Handel’s noble and beloved Water-Musick, composed in 1717 for a barge party on the River Thames organized by Handel’s patron, George I. There will also be a concerto for two horns, featuring ABO hornists Drew Stephen and Kevin Miescke, by Vivaldi (a native of the watery city of Venice), and Telemann’s lesser-known but vividly descriptive Hamburger Ebb und Fluth invokes a variety of Greco-Roman sea deities, including Neptune, his consort Amphitrite, and their son Triton. The French were particularly renowned for their depictions of natural phenomena, and the storm scene from Marin Marais’s opera Alcyone is not to be missed. Come along with us – it’ll be a wild, wet ride!