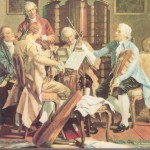 Saturday, May 24 at 8:00pm – First Presbyterian Church in Austin

We’ll close out our third season with the sublime chamber music of the Classical era. The Age of Enlightenment saw the birth of the salon, gatherings where debate and exchange of ideas was as important as conversation and socializing, and live music was almost always a part of these functions. Musicians throughout the eighteenth century viewed the making of chamber music as a social activity, and as the century progressed, chamber music took on more of a conversational quality. As you experience this concert, we think you’ll come to agree with this assessment, too.

Enjoy this chamber music the way it originally was, in an intimate setting and played in a conversational manner, on Classical instruments. We’ll revel in the youthful brilliance of Mozart (his first piano trio wasn’t necessarily intended for piano!), the humor and wit of Haydn, and the exotic, Spanish influences of Boccherini (featuring guitarist Scott Horton on the “Fandango” Quintet for Guitar and Strings), along with equally charming fare by J.C. Bach, Domenico Cimarosa, and more.