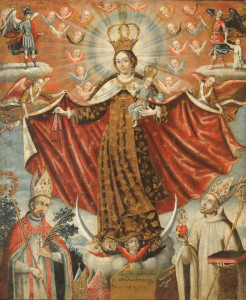 The vast majority of the music that survives from colonial Latin America is religious music, and a good bit of that is music written for specific holidays and feast days during the church year. Many of these works were large-scale, for large vocal forces and instrumental groups, but others were more intimate, meant for private devotionals or services such as Matins or Vespers.

In this special summer concert, part of the American Choral Directors Association’s Second Symposium for Latin American Music, we’ll perform villancicos, cantatas, and arias written for Christmas, Corpus Christi, and the Feast of St. Peter. All of the secular music wasn’t lost, though, so we’ll include a sampling of that as well.

Works by Ignacio Jerúsalem, Manuel de Sumaya, and Esteban Salas y Castro, along with an anonymous work from the Mission of San Ignacio de Moxos in Bolivia.

This concert is free and open to the public.