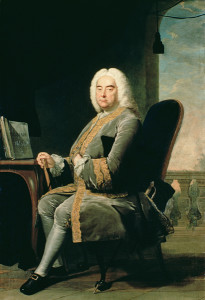 Handel’s operas were wildly popular in London. They were so popular that the immigrant Handel was soon the most famous musician in the English capital, and he had more than his share of friends, enemies, and frenemies. The English couldn’t get enough of his musical dramas, complete with all of the extremes of human emotion, not to mention the plethora off-stage personal drama that permeated the lives of his divas.

The industrious Saxon realized that Londoners might enjoy religious drama as much as they did operas about ancient heroes and gods. In 1732 he revised an earlier piece he had written, based on a libretto by Jean Racine and depicting the story of the Old Testament heroine Esther. His supporters found out, and begged him to reprise the work. There was one problem: the Bishop of London forbade any presentation of any Biblical story on stage. Handel’s solution was simple and brilliant, namely, to perform the work on stage as a concert, and not as a musical drama. It worked, and in the process he created a genre with which his name has been inexorably linked, that of the English oratorio.

We hope you’ll join us for our fourth season grand finale, Handel’s masterful Esther. Calling for a large, colorful orchestra that includes a full compliment of woodwinds, brass, strings and even harp, a full chorus, and soloists, you’ll experience some of Handel’s most powerful choral writing, as well as some of his most beautiful writing for solo voice.  Come and learn how Esther, a Jewish orphan, becomes Queen of Persia and through cleverness, bravery, and more than just a little bit of her feminine charms, saves her people from a bloody fate. The best part? It’s sung in English, so you’ll know exactly what they’re saying!