Home » A Cantata By Any Other Name… 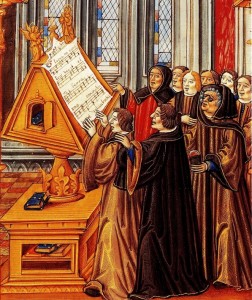 By the eighteenth century, the term cantata generally referred to one or two specific musical genres. In France and Italy, the secular cantata was the most popular form of vocal chamber music, and Bach’s corpus of sacred cantatas contain some of his most powerful and evocative music. But before the word cantata had these distinct meanings, it simply referred to any piece meant to be sung, usually with instrumental accompaniment.

It is in the spirit of that earlier and broader definition that we present a selection of Baroque works for choir and orchestra, including a motet, a celebratory ode, a Marian hymn, and a Lutheran cantata. You’ll be moved by J.S. Bach’s masterful Jesu, der du meine Seele, and you’ll feel as regal as Louis XIV as you experience Charpentier’s sumptuous and martial Te Deum.  If works with words in Spanish are more your cup of té, you’ll love Ignacio Jerúsalem’s coronation ode Al combate, which will receive its Texas and period-instrument premiere in this concert.  Along with a rarely-performed work by Buxtehude, the music we give you in this program will show you that a cantata by any other name sounds just as sweet.